My name is Karen Hall and I was asked to run workshops for the year two pupils at Vickerstown School on Walney Island. The topic was “the work of Kurt Schwitters” and I decided to concentrate on the collage element of his work.
I first introduced the children to different papers sourced from a variety of places. I grouped the papers into four categories: Vintage, new, packaging and magazines. This was to show the children that collage can include a wide variety of found components that don’t have to cost money. I hoped to encourage them to begin their own collections at home and in the classroom.
We looked at some of Schwitters collages and discussed what he had used within his work. I referred to our collection of different papers which included receipts, food wrappers, tickets, postcards and wallpapers and over several weeks I set the children various challenges.
The first was to make a split pin puppet. We looked at examples and referred to Schwitters modern fairy tales. It was excellent to see the children fully engaged in the project, making their own puppets and developing characters and stories for them. 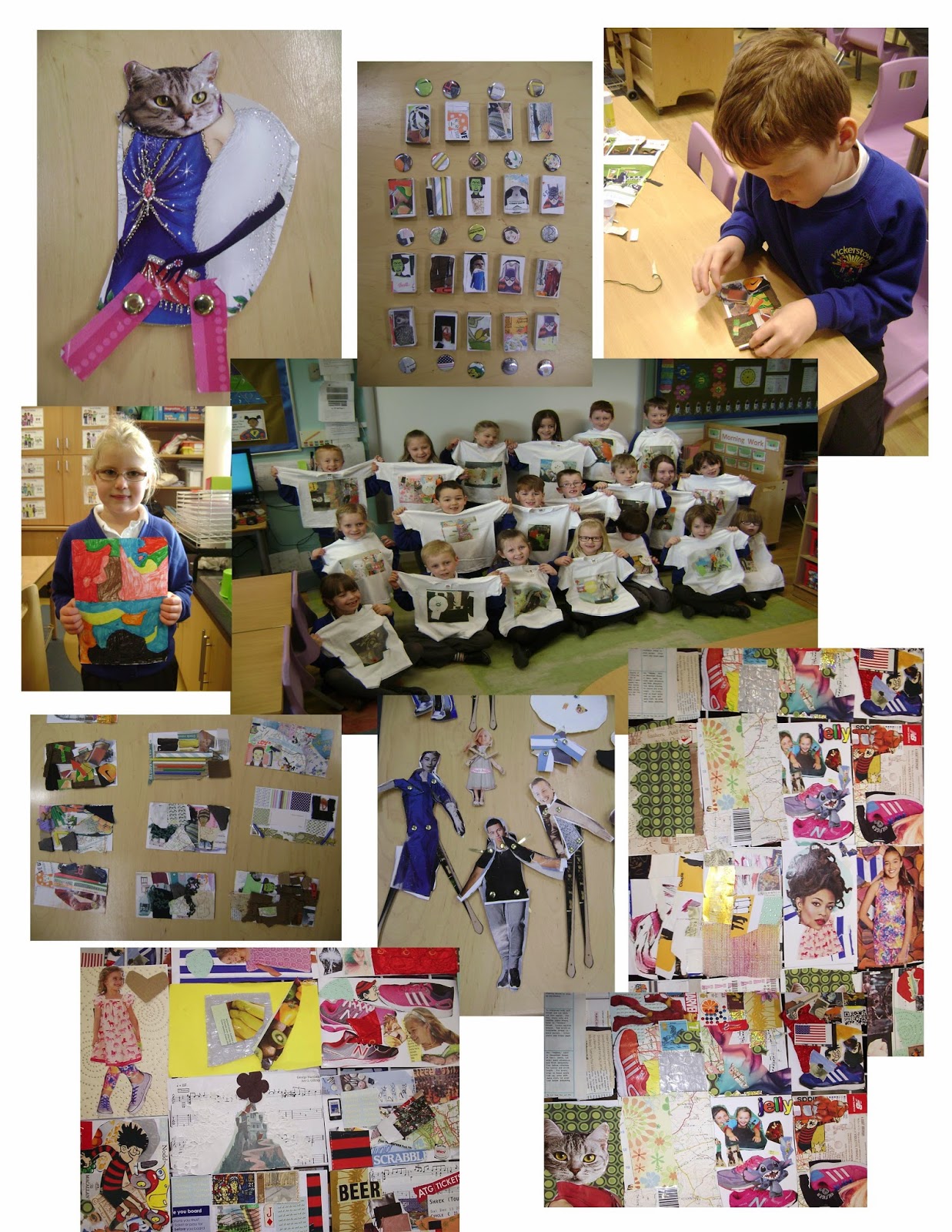 We then made a scene for the puppets to inhabit. Each child was given a cereal box to collage an environment onto. They were asked to think about their puppet, asking who it might be and where it might live. The children had to select appropriate papers to represent such things as water, sky, space and sand. At this stage most children were demonstrating a good understanding of collage and the possibilities it presents.
The next exercise involved posing the puppets onto the backgrounds and photocopying the image onto special transfer paper. The paper allows the design to be ironed onto fabric and the final pictures were then printed onto t-shirts for the children to keep. They were delighted with their T-shirts and couldn’t wait to wear them. We displayed them around the classroom on a washing line as a reminder of their achievements.

Fabric was now introduced as a collage material. Each child was presented with a collage pack that contained a combination of different papers, plastic wrappers and fabrics. When making them I had tried to theme each pack using colour and texture as a guide. The challenge given to the class was to make two postcards using the provided materials. The postcards would then be posted back to the school and the first three to arrive back would win a prize. The children were very excited about the race and at the thought of winning.

The spring term was now beginning and it seemed appropriate to move the children onto another challenge. My thought was to make a large collaged wall hanging made up from smaller collages and photos of the children transferred onto fabric. They had already experimented with scraps of fabric and glue during the previous term, now it was time to learn some sewing skills.

Each child was given a bag that contained complimentary fabrics, buttons and threads and a needle to sew with. After demonstrating a basic running stitch and armed with a diagram to remind them, I asked everyone to create a small textile based collage. Unfortunately this task proved rather difficult for my year two pupils. Although some arose to the challenge, several struggled with even the basics of sewing like needle threading. After this workshop I reassessed my ideas and took a step backwards, spending one afternoon sewing Binca with large plastic needles.
This proved successful. By the time the school bell sounded, each child had decorated, using embroidery threads and running stitch, a Binca bookmark. We spent one more lesson sewing collages and then decided to move on with the project. 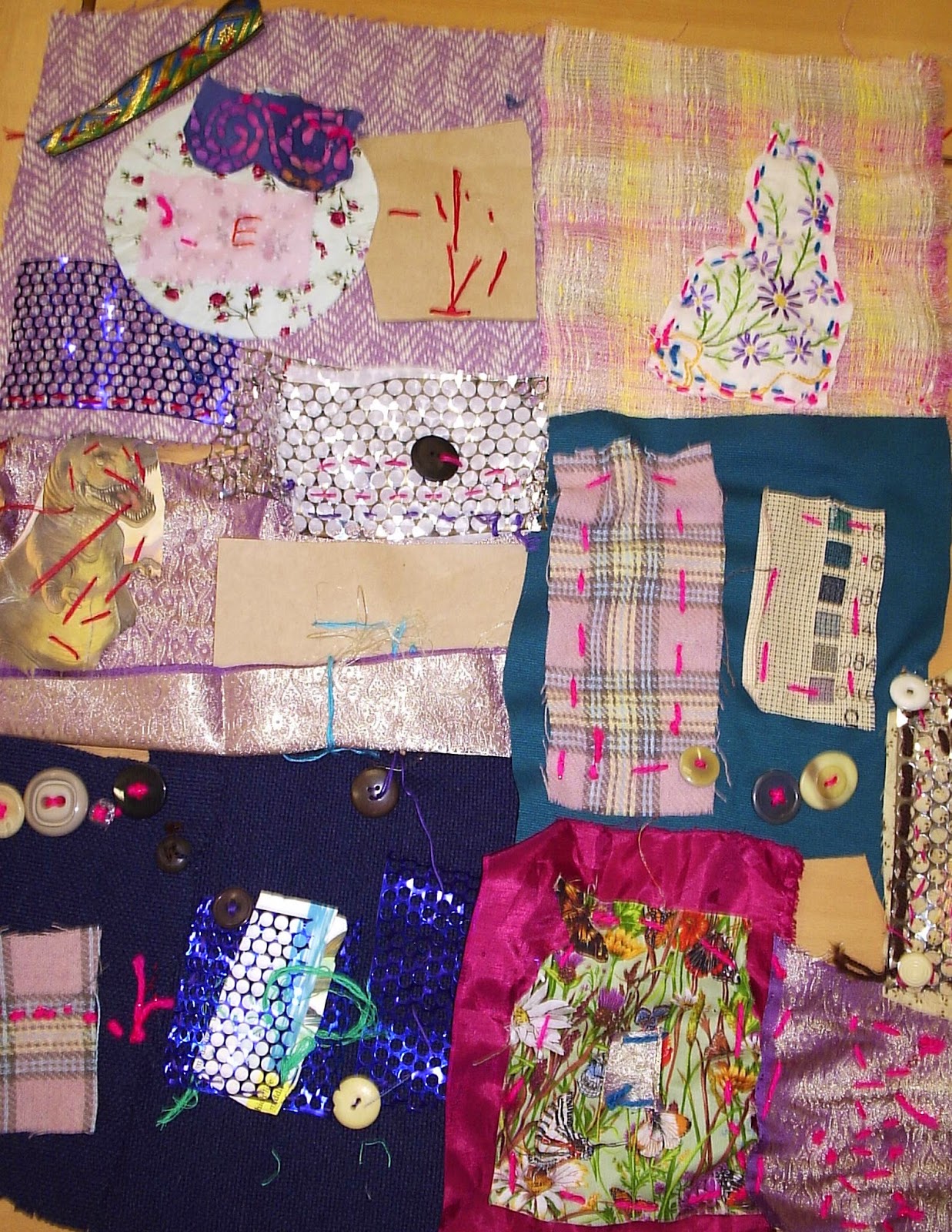 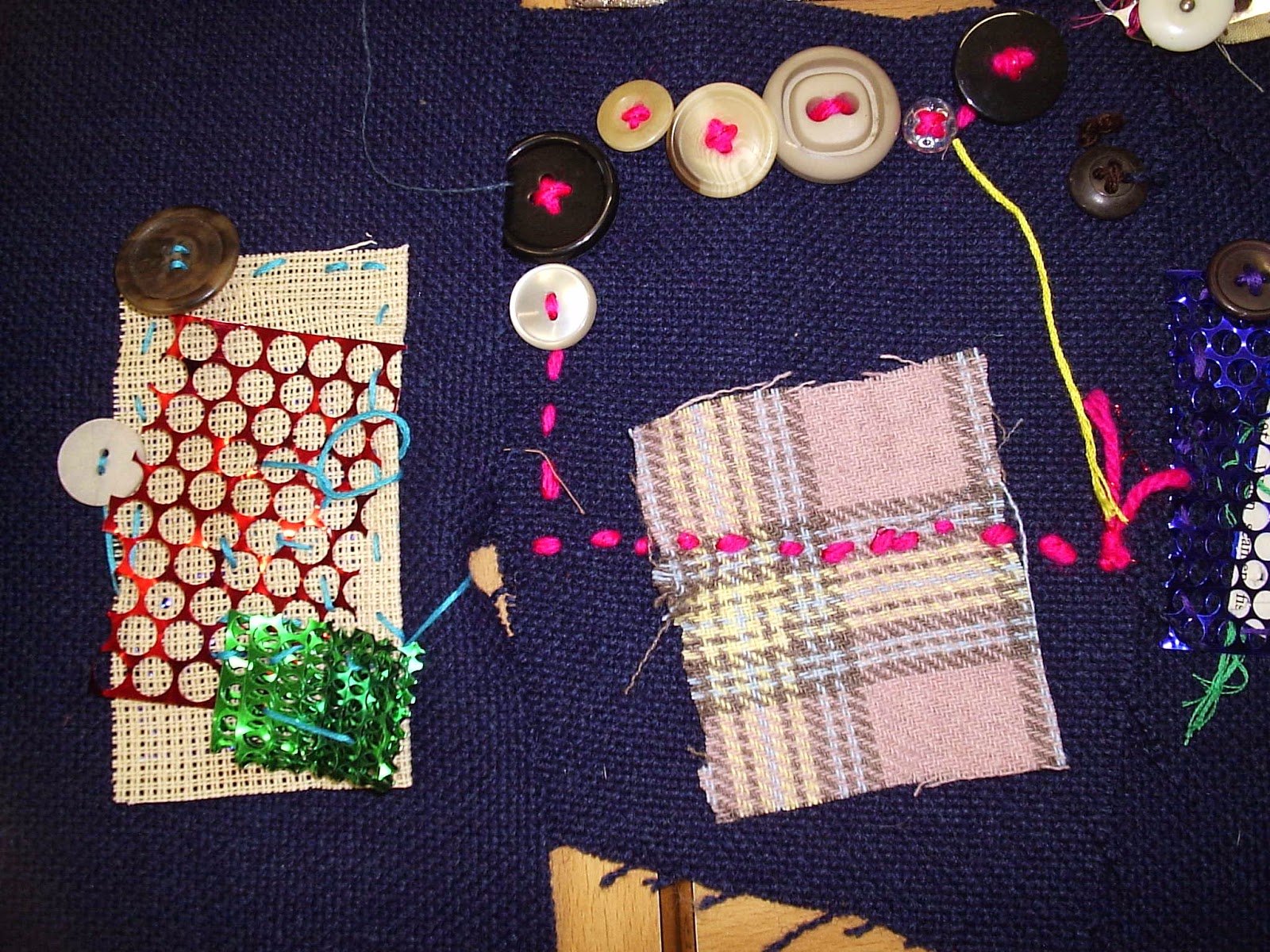 Our day out at the Merz barn was excellent and even the weather was kind, giving us a beautiful sunny day. Firstly we visited Ambleside’s Armitt museum to see some of Schwitters work. The children were all excited and very interested to see his art up close and they freely asked questions and discussed their favourite pieces within the museum. For some, this was their first time seeing original works of art.At the Merz barn we firstly had lunch and then were divided into two teams of twelve. Children from Langdale School had made two trails for us to follow, each marked out by collaged marker flags. The children loved the woods and gathered small objects along the way; things like acorns, leaves and fir cones which would be later used in their own mini Merz barn collages. One young man said he felt like a pirate looking for treasure.

Once we had found the barn we went inside to see Schwitters work and we learned about how it had been made and the barns history. We spent some time thinking about what it must have been like working there and we later listened to a recording of Schwitters reading out one of his sound poems. The children then spent time making their own 3D collages based on the barn using their collected items, other found objects and clay. After a short break, the pupils made and recorded their own sound collage / poem by recreating noises that had been “found” in the woods. The class and teachers were so proud of their two poems that they decided to perform them during the next school assembly.During the visit we also learned about the Merz Snakestick that had once hung above the barn door. The stick, decorated by Schwitters, had been stolen in the 1980’s and the Littoral society where encouraging people to make their own, aiming to collect a million before 2023. I thought it would be a good workshop idea so everyone collected a stick from the Cylinders estate to take back to school, collage then return them to the barn.

See our page "Merzbarn Visits ; Vickerstown" for pictures from the day.