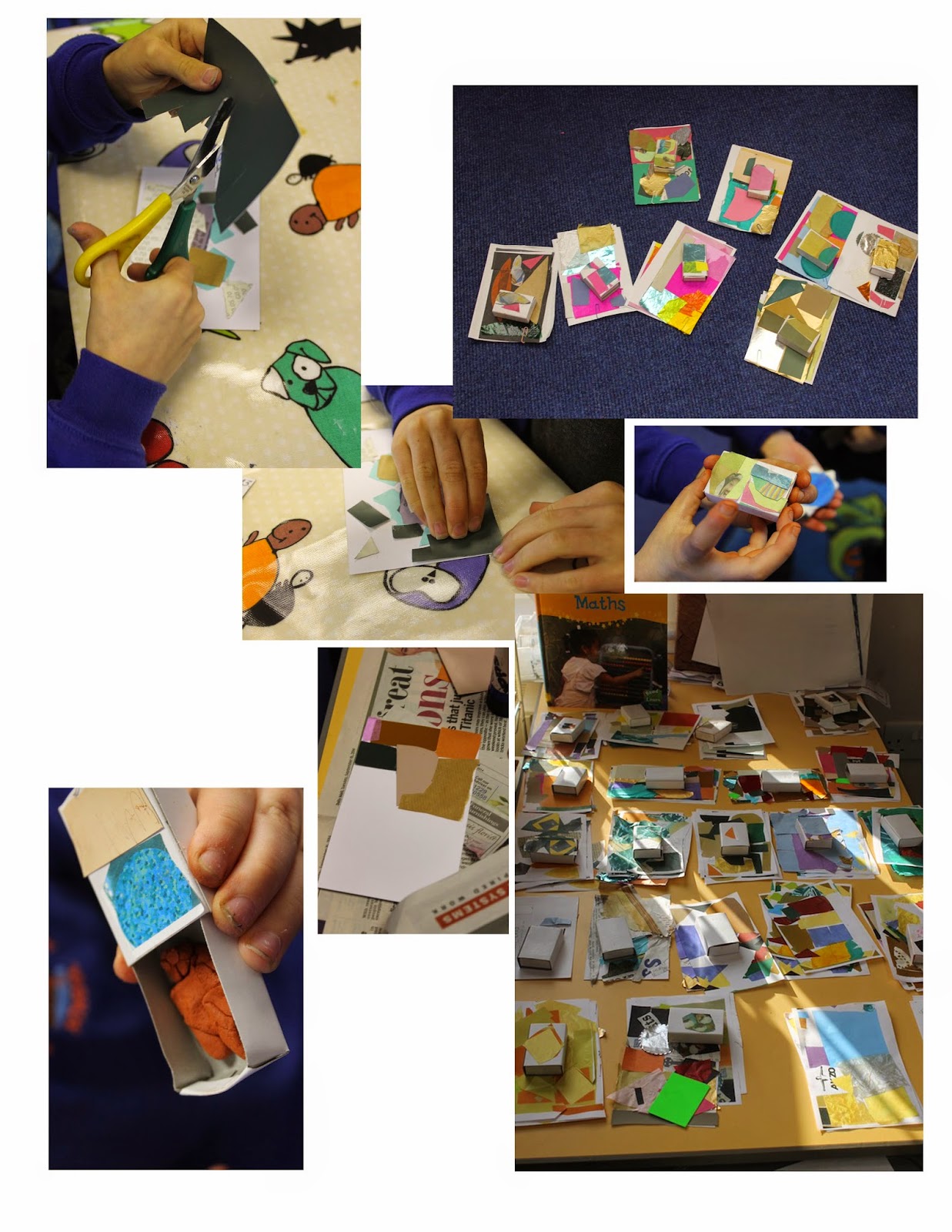 Week 1 at South Walney Infants with Ellie Chaney.
As their introduction to the project the Year Two boys and girls have made some beautifully composed postcard collages using a variety of coloured and textured papers. 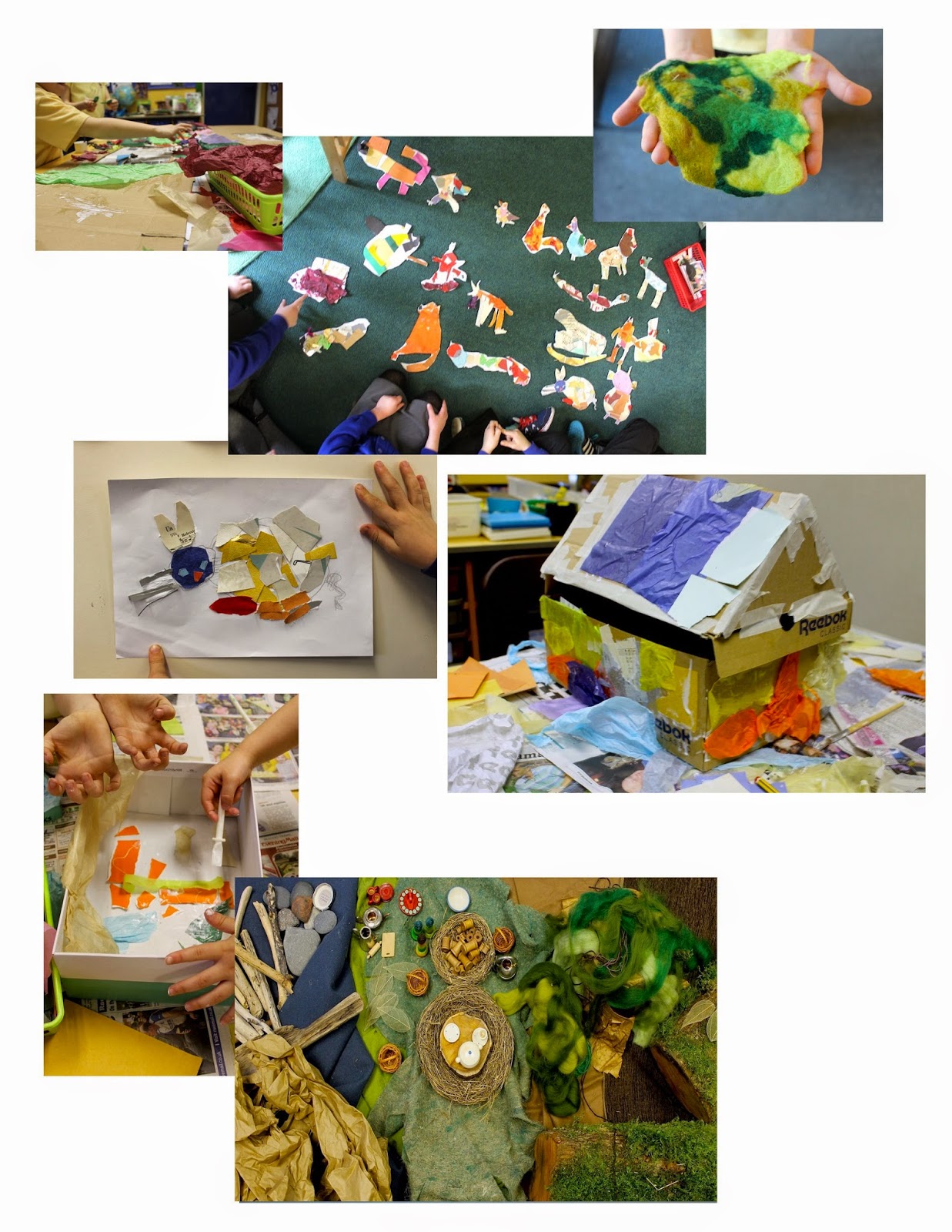 Ellie also provided clay and matchboxes, for which the group made collage labels, and small inhabitants. Since then , the group have been exploring the theme of Small Worlds, enabling them to examine surface and colour as well as methods of construction. The boys and girls have made collage characters and habitats, using card, paint and felting.

Exploring the art of Kurt Schwitters using imaginative play
An update on 'Overground' at South Walney Infant School by Ellie Chaney
At South Walney Infants I'm working with two classes of Year 2 children, which is a great age to work with as they have great imaginations and like to develop ideas through play. I knew from the beginning I wanted to use imaginative play and storytelling to explore Schwitters' work, and began to try and think of a fun and slightly fantastical way we could approach his practice. Knowing that we would be installing the work at Bram Longstaffe Nursery at the end of the project I always wanted there to be a narrative running through the work, planning that we could then share the work as some form of story to the Nursery children.

I wanted to encourage the children to imagine what it would be like watching Schwitters' at work and to see him absorbed in his creative process inside the Merzbarn. Because the Merzbarn is set in such a magical location in the Elterwater woodland I began from here, thinking about what animals might live there as a springboard to help the children picture themselves watching Schwitters create. This led to the idea of tiny people living in the woods, watching Schwitters in his studio and being so inspired by this that they decorated their own homes using collage and found objects. 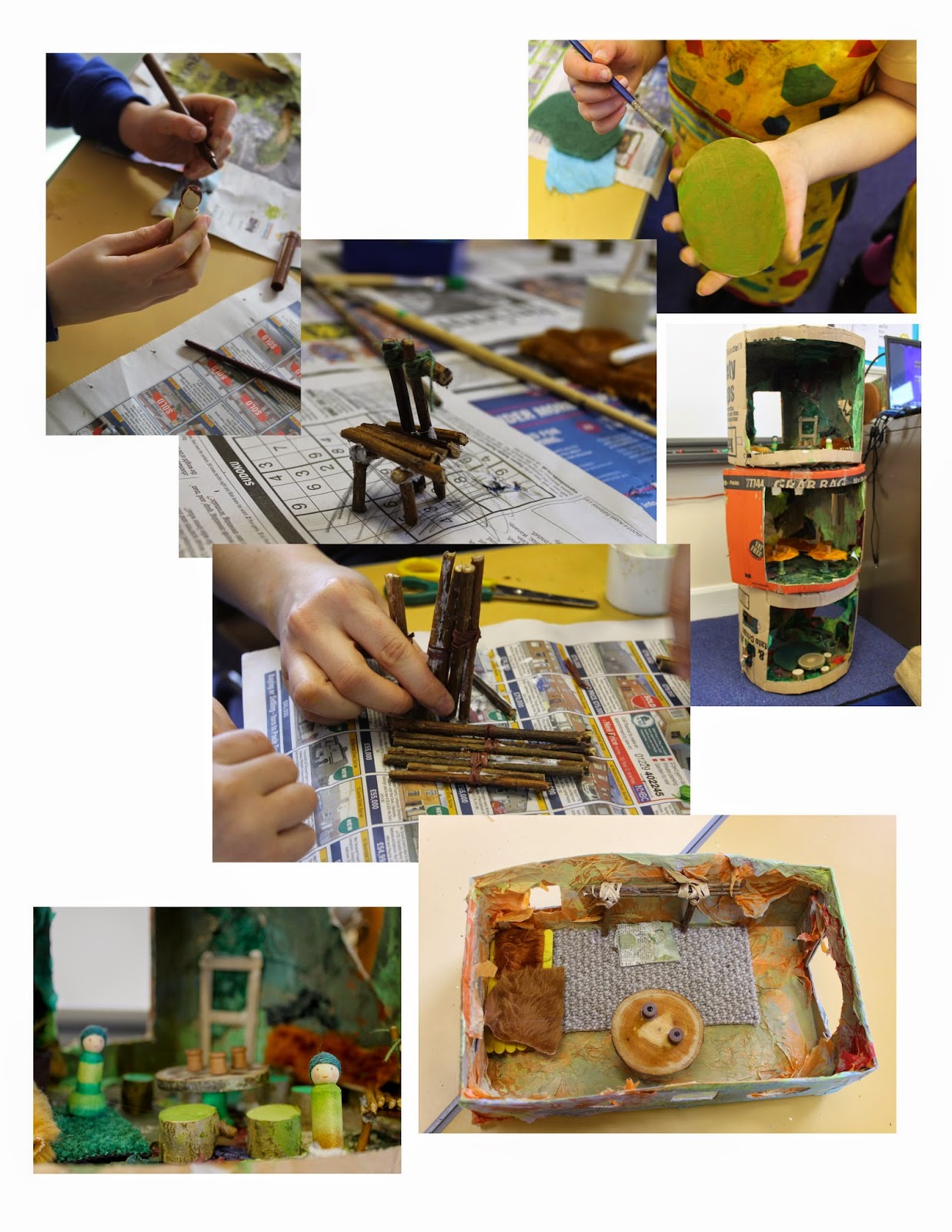 When I suggested this idea to the teachers Mrs Thompson and Mrs Ensoll they were really enthusiastic, and together we developed the concept so it would also incorporate playing with scale. The children would make tiny homes for the tiny people and then they would 'become' the tiny people, surrounded by giant leaves and flowers. By exploring Schwitters'  world from a variety of perspectives I hoped there would be lots of imaginative opportunities for them to think about his life and art.

We began by making simple collages of the woodland animals you might find living around the Merzbarn. These were lovely, and some of them had real character as you can see in the photos.

We then began to build the homes of our little people. The teachers and I had decided to make two little worlds. One would be in the woods at Elterwater -  a tree trunk dolls house using greens, browns and other forest colours. The other would be houses that could belong to miniature people living on the beach at South Walney using blues, yellows and greys. This was to help create a starting place for our 'journey' from South Walney and on through the world of Kurt Schwitters.

We constructed these little homes out of cardboard and masking tape. These were then decorated using collage and painting, creating textures inspired by wood, moss, driftwood and sand by scrunching up tissue paper and sticking it onto the surfaces. In small groups with myself and brilliant student volunteer Katherine Harris the children also learned to felt, making fake moss to decorate the small woodland world with.

We then moved on to making furniture using natural materials like sticks, slices of logs, branches and raffia. Wooden bobbins, cardboard and materials from the Ulverston Scrap Store were all combined to make miniature tables, chairs, beds and even toilets. I let the children create these very freely, only really offering technical advice about how to stick or bind materials together and the results really amazed me. Little ladders led to bunk beds, matchsticks became tiny fires and paper cups turned into outhouses! They also made garden furniture like swings, picnic tables and even a fountain.

After working really hard for several weeks the day came when the children had built homes ready to be moved in to, so we made people out of shortened dolly pegs, crafting hats, scarves and hair out of small pieces of handmade felt. Now all that's left is to paper mache and mod roc the tree trunk house and put everything together which we are all very excited about.

Moving on to exploring the world through the eyes of the fantasy folk we read an extract from a children's edition of  'Gulliver's Travels' where Gulliver finds himself on the island of giants. We then began to make giant leaves out of cardboard, and will be moving on this week to building giant flowers out of withies and tissue paper, ready to build a supersized world at Bram Longstaffe at the end of the project.

Sadly we only have two full days of workshops left and there is still lots to do! I have enjoyed this project so much, and the children have all produced some wonderful artwork. I am really looking forward to setting everything up as a walkabout assembly for the rest of the school on Friday 22nd May, and to see it all displayed alongside the other schools' work at Bram Longstaffe.